Displaying Canes, Walking Sticks, Staffs, or anything of that nature.

Collectible canes and walking sticks are available in a wide range from many cultures and time periods.
The basic purpose of a walking stick or cane is to help a person balance while walking. Walking sticks used by hikers aid in clearing the way as well as breaking downhill or added support for going uphill. They have also been known to be used as a defensive or offensive weapon which may even conceal a blade in the end.
Around the 17th or 18th century a rigid stick took over from the sword as a part of the European gentlemen’s wardrobe and was used primarily as a walking stick. In addition to its value as a decorative accessory it also continued to fulfil some of the function of the sword as a weapon.
Many of the old vintage canes and walking sticks are now sought after by collectors.
Art Display Essentials has developed a stock stand just for canes and walking sticks. The bottom is made of 3/8” steel to give good ballast to a stick that extends far past the arms of the base. These arms can be bent to adjust for the different diameters of different walking sticks, canes or staffs. 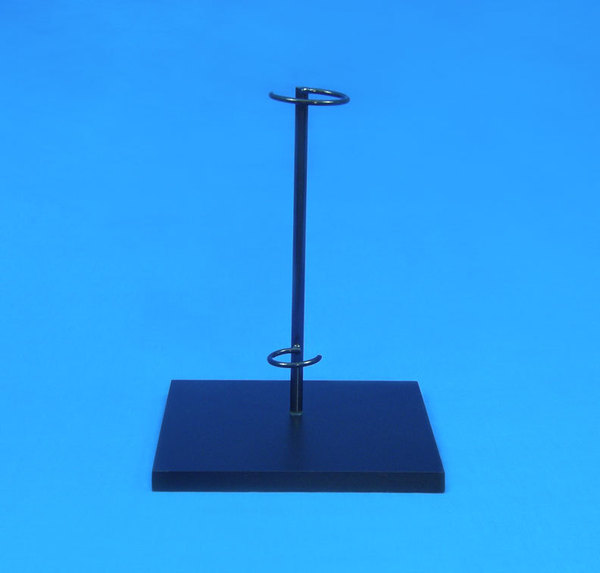 Sometimes a custom size or finish is desired, so a custom mount would be the solution. 10-31 Inc. has been making custom mounts for over 25 years and makes a very nice stand for these pieces. They can also fabricate wall mounts as well.

Some walking stick types (from Wikipedia):

Ashplant — an Irish walking stick made from the ash tree.
Devil's walking stick — Made from Hercules plant.
Shooting stick — It can fold out into a single-legged seat.
Supplejack — Made from a tropical American vine, also serves as a cane.
Penang lawyer — Made from Licuala. After the bark was removed with only a piece of glass, the stick was straightened by fire and polished. The fictional Dr. Mortimer owned one of these in The Hound of the Baskervilles.
Makila (or makhila) — Basque walking stick or Staff, usually made from medlar wood. It often features a gold or silver foot and handle, which may conceal a steel blade. The Makila's elaborate engravings are actually carved into the living wood, then allowed to heal before harvesting.
Kebbie — a rough Scottish walking stick, similar to an Irish shillelagh, with a hooked head.
Whangee — Asian, made of bamboo, also a riding crop. Such a stick was owned by Charlie Chaplin's character The Tramp.
Malacca — Malay stick made of rattan palms.
Pike Staff — Pointed at the end for slippery surfaces.
Scout staff — Tall stick traditionally carried by Boy Scouts, which has a number of uses in an emergency
Waddy — Australian Aboriginal walking stick or war club, about one metre in length, sometimes with a stone head affixed with string and beeswax.
Ziegenhainer:— Knotty German stick, made from European Cornel, also used as a melee weapon by a duellist's second. The spiral groove caused by a parasitic vine was often imitated by its maker if not present.

Canes and Walking Sticks for Sale:

The World of the Walking Stick

The last time walking sticks were popular, Fred was dancing with Ginger and movies were filmed in black and white.
Back then, a walking stick was as much a part of a stylish outfit as a bowler hat and a pair of spats.
So why are people in the high-tech '90s paying hundreds, even thousands, of dollars for a piece of fashion history?
Because they've become a hot collectible, says Liela Nelson of Englewood Cliffs, N.J. There are two auctions every year on the East Coast and two on the West Coast devoted solely to walking sticks, explains Nelson.
A one-of-a-kind folk-art stick might fetch more than $200,000.
Nelson, along with husband Bernard, operates a little firm called "The World of the Walking Stick" through which she sells artfully crafted sticks to a clientele ranging from serious collectors to aging businessmen in need of a bit of ambulatory assistance.
While most of her walking are antiques, some are new, the products of the few remaining English firms that fashion sticks from sterling silver and ebony.
Like many of her clients, Nelson stumbled onto walking sticks while searching for another type of collectible - in her case, carved ivory. (Many antique walking sticks have elaborately carved ivory handles.)
Passion became business
It was love at first sight, and her husband suggested turning her new passion into a business.
On average, Nelson stocks between 100 and 150 sticks, ranging from pricey antiques like the Faberge stick that she sold for $17,000 to a sterling-silver lion-head stick crafted in England that might fetch several hundred dollars.
For a woman with a master's degree in decorative arts from New York University, it is the perfect niche.
Nelson can travel to Europe in search of stock, surround herself with elegantly crafted items, and indulge in research to her hearts content
Ancient heritage
Walking sticks have existed in one form or another since the first homo sapiens picked up a branch to help himself over rough terrain, Nelson says.
King Louis XIV of France carried ornate, jeweled walking sticks and restricted their use only to the aristocracy.
"He didn't want his subjects carrying sticks in his presence," says Nelson. "It was his symbol of power."
The dandies of post-revolutionary France were often pictured with walking sticks, as were many of the gentlemen of the 18th and 19th centuries.
"The 19th century was the hey-day of the walking stick both here and in Europe," says Nelson.
"They were a status symbol because it was one way you could judge how much money a man had".
'Tiffany made them, as did all the important porcelain houses. Faberge made sticks from quartz and jade." Nelson says. "Some had diamond eyes, and artisans used enamel for collars. They were quite beautiful."
Walking sticks were also crafted by folk artists and by seamen, who carved scrimshaw canes from whalebone.
A folk-art stick owned by P.T. Barnum recently sold for $250,000.
Used for hiding things
Some walking sticks performed dual functions, serving as flasks or as a place to hide cameras, swords, guns, or umbrellas.
Jascha Heifitz had a violin stick he frequently took out at concerts.
There are highly valued presidential sticks, with knobs carved to resemble various heads of state.
Some are carved with the likenesses of founding fathers such as Thomas Jefferson and Benjamin Franklin.
The abundance of presidential sticks leads Nelson to theorize that they may have been passed out to the public like modern-day campaign buttons.
Modest prices unusual
These days, it is difficult to turn up a really fine stick at a modest price.
"It is much harder to find a fabulous, fabulous find," says Nelson, who once counted fashion designer Ralph Lauren among her clients.
As some of the original collectors die, however, their collections will resurface in the marketplace sooner or later.
"You can always get wonderful sticks, it is just more difficult and more expensive."
Which means that, when Nelson gets a call, from someone looking for a handsome alternative to the standard cane, the prospective buyer will usually suffer from sticker shock.
A new, decorative sterling-silver stick costs between $250 and $500.

A Leg Up On Canes by Valerie Gladstone - The Wall Street Journal - August 7, 1998

FORGET FUNCTION: Canes are for collecting.
Just ask Bill McCullam, a New York marketing consultant who has bought 20 worth an estimated $25,000. Think of the phrase, "Thy rod and thy staff shall comfort me," he says.
"King Tutankhamen, Henry III, Louis XIII, Napoleon, Frederick the Great, President Washington and my dad collected canes. Now I'm addicted."
But cane collecting is no cheap endeavor. Prices start at $200 and reach tens of thousands of dollars. "The most expensive sell best," says Bill Rau, owner of Rau Antiques in new Orleans, whose collection includes a $15,000 cane made in Russia in 1900 by the illustrious designer Carl Faberge. Mr. Rau sells about $1 million worth of canes each year. His biggest sale last year was an 1875 French cane encrusted with gold and diamonds; it went to a Texas oilman for $60,000.
The Rau catalog advertises 200 canes, most made in the U.S. and Europe in the 18th and 19th centuries.
Two other major American dealers, Leila Nelson at the World of Walking Sticks in Englewood Cliffs, N.J., and Henry and Nancy Taron at Tradewinds Antiques & Auctions in Manchester-by-the-Sea, Mass., also carry a large variety of canes. Antique stores are another good source.
For Mr. McCullam, cane collecting is as much a fashion statement as a hobby. Following a custom popular in the U.S. and Europe from 1820 until World War I, he "wears" (the term preferred by collectors) a $1,400, 1890s-era, gold-headed cane with an ebony shaft to dinner parties.
"Men, women and children wore them," he says. "Anyone who called himself a gentleman owned at least three; an evening cane, a country or day cane and a system cane."
System canes hide something inside or convert into other objects like seats, music stands and hammers. Leaning protectively over his collection, Mr. McCullam proudly displays one such device; a "friendship cane" that features a long, slender cylinder inside the shaft for storing liquor and two silver shot glasses in the knob.
More than 1,500 patents were issued for system canes during their heyday from 1870 to 1915. The Rau catalog includes ones with telescopes, fans, perfume bottles, opium holders, bordello whips, trumpets and backgammon sets. One photograph in the catalogue shows "La Diabolique," "La Terrible" and "The Redoutable," which sell for between $3,500 and $4,000. Made with retractable razors and spikes, these canes came into use during the French uprisings of the 1870s.
Richard Velaj, a neuroradiologist in Greenwich, Conn., says the cane's romantic aura prompted him to amass a collection worth close to $15,000. "I take the one with binoculars to the opera," he says. "It makes my evening much more dramatic. I lean on it and gaze around discreetly. I feel just like Daniel Day-Lewis in "The Age of Innocence."